FIVE years ago to the day, the world of music lost pioneering bassist and Yes co-founder Chris Squire to acute erythroid leukaemia. He was 67, and left behind an enduring legacy with the band on whose every album he has played to date.

My first exposure to Squire’s art was on the three recordings that I still regard as the pinnacle of Yes’s achievements over the past 52 years – ‘Close to the Edge’ (1972), ‘Tales from Topographic Oceans’ (1973) and ‘Relayer’ (1974). His combination of power, subtlety, distinctive tone, rhythmic dexterity and melodic counterpoint had an instant impact on me. I was further hooked when I saw him in action on ‘Yessongs: The Movie’ in 1975. The short feature on “Hold Out Your Hands”/”You By My Side”, which formed one of the pre-features to that film, convinced me of the need to buy the bassist’s solo album.

‘Fish Out of Water’ (1975) – aided by wonderful arrangements from Andrew Pryce Jackman (also sadly deceased) – remains Squire’s towering achievement outside Yes. That recording certainly sits for me alongside the finest the band as a collective has produced in the studio, and is one of the very best solo records from any of its alumni. ‘Safe (Canon Song)’ and ‘Silently Falling’ could easily have spanned the bridge between ‘Topographic’ and ‘Relayer’ for Yes – which in a sense they did, in their own way.

One of the less-noticed features of ‘Fish Out of Water’ is the appearance on the first two tracks of Barry Rose, then sub-organist at St Paul’s Cathedral. His pipe organ contribution was recorded separately, and in the end it was quite an engineering feat to get it to fit properly. With today’s technology that would be no problem. In the mid-70s it was a nightmare! The whole tale is told superbly by Sid Smith, writing in Prog magazine a couple of years ago. Barry Rose went on to become perhaps the most acclaimed choirmaster in England. Squire was one of his many proteges, singing at St Paul’s and at Guilford Cathedral on a number of occasions. The now retired organist, composer and conductor fittingly attended his London memorial service at The Queen’s Chapel Of The Savoy, just off The Strand in central London.

Turning away from the studio, my first experience of Chris Squire live was also my first major rock concert – seeing Yes at the old Empire Pool Wembley on 28th October 1977, on the ‘Going for the One’ tour. The bassman’s dramatic, animated, yet precise performance, his incredible timing and his ability to juggle competing time signatures between the bass and harmony vocals made a lasting impression. At his best he could be magnificent, moving, original and tender with that trademark 1964-65 Rickenbacker 4001 (model RM1999, serial number DC127). On other occasions, particularly later in his career, the showiness could take over just a little too much.

So while he achieved considerable heights with Yes, on his 1975 solo recording, and in some other musical spaces, Chris Squire also had his vulnerabilities. Alcohol was one, as I recall from a rather strange conversation with him in the US in the late 1990s. When I last saw him perform, in 2014, he was somewhat past his best, and physically diminished, but still putting his heart and soul into the music. His partying tendencies had taken their toll, perhaps, and his ponderous nature meant that his output over a long career remained relatively small in quantity. You had the feeling that he had so much more to give. Among those who expressed frustration at his habitual lateness and other proclivities was drummer Bill Bruford (with Yes from 1968-1972 and 1991-92). Yet it was Bruford who penned perhaps the most touching and fulsome tribute to the bass giant in 2015. He wrote:

Really saddened to hear of the death of my old Yes band-mate, Chris Squire. I shall remember him fondly; one of the twin rocks upon which Yes was founded and, I believe, the only member to have been present and correct, Rickenbacker at the ready, on every tour. He and I had a working relationship built around our differences. Despite, or perhaps because of, the old chestnut about creative tension, it seemed, strangely, to work.

He had an approach that contrasted sharply with the somewhat monotonic, immobile bass parts of today. His lines were important; counter-melodic structural components that you were as likely to go away humming as the top line melody; little stand-alone works of art in themselves. Whenever I think of him, which is not infrequently, I think of the over-driven fuzz of the sinewy staccato hits in Close to the Edge (6’04” and on) or a couple of minutes later where he sounds like a tuba (8’.00”). While he may have taken a while to arrive at the finished article, it was always worth waiting for. And then he would sing a different part on top.

An individualist in an age when it was possible to establish individuality, Chris fearlessly staked out a whole protectorate of bass playing in which he was lord and master. I suspect he knew not only that he gave millions of people pleasure with his music, but also that he was fortunate to be able to do so. I offer sincere condolences to his family. Adios, partner. Bill.

This says almost all that needs to be said, though I will add the succinct summary from a host of responses on Yesworld, provided by keyboard player Tom Brislin (Yessymphonic tour and ‘Symphonic Live’ CD/DVD, 2001):

Chris Squire was an imposing force of originality. He was a true composer, reflected not only in his memorable bass lines, but also through his ear for vocal harmonies. From the time he co-founded Yes to the present day, these contributions were pillars of the band’s identity.

Indeed so. Among the tunes he penned that will stay with me are the extraordinary “On the Silent Wings of Freedom’ (‘Tormato’, 1978). This track exemplifies almost more than any other in his career Squire’s ability to make the bass sing, hum and soar, and well as swoop down into apocalyptic menace. His Taurus bass pedals could tear into the pit of your stomach in live performance of songs like “And You and I” (‘Close to the Edge’, 1972). Then there is the overwhelming bass/pipe organ combination on ‘Parallels’ and the triple-necked extravagance of “Awaken” (both ‘Going for the One’, 1977.) His playing on the New Wave prog retrofit that was ‘Drama’ (1980) was also superb in its intensity and exactness, almost matching the alternating ferocity and tenderness of ‘Relayer’ (1974) at times.

It was Chris Squire’s use of the pick in tandem with his thumb that gave him a sound which was, implausibly, both ‘dirty’ (Trevor Rabin) and sonorous. But he was a fine writer and harmony vocalist, too. In terms of other trademark outings, listen to his single with Alan White, “Run with the Fox” (1981), and its choral re-working on ‘Chris Squire’s Swiss Choir’ (2007), along with a thunderous bass undertow for the rendition of “Personent Hodie”. Or marvel at the high energy “Violet Purple Rose” (with Steve Stevens, Michael Bland and Billy Sherwood, ‘Conspiracy’, 2000) and the tumultuously fast bass and overload-guitar middle section on “A Life Within A Day” (from the Squackett album, 2012). Another personal favourite of mine is the glorious looping bass line that achieves particular prominence at the end of the incredibly poignant “Say Goodbye” (‘Conspiracy’ again). 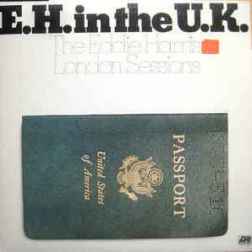 In a quite different vein is the often-bypassed London Morgan studios session Chris Squire did for jazz legend Eddie Harris, especially the 15’ 54” “Conversations of Everything and Nothing”. This appeared on ‘E.H. in the U.K.’ (Atlantic, 1974), which also featured Yesmen Tony Kaye (organ) and Alan White (drums) across four of the six tracks. The other one that the three Yes musicians recorded together with Harris was Charles Stepney’s “I Waited for You”. In some ways, as one critic observed at the time, they were on ‘best behaviour’ with EH, and didn’t push the musical envelope too much. But it is still an affecting appearance. The album was deleted some time ago. It is available second hand on vinyl, and has appeared in Europe and Japan on CD. A FLAC download can also be found.

It is also important not to forget two fine pieces Chris sang on, and helped write, but which he did not play bass for. The first is “To the Rescue” (‘Esquire’, 1987, with former wife Nikki and band), a slice of anthemic ’80s prog-pop with some gorgeous overlaid harmonic textures. The second is the magisterial “The More You Live – Let Go” (‘Union’, 1991), which was the first song Billy Sherwood and Chris Squire wrote together. Squire insisted that Yes should keep Sherwood’s bass part, which they wanted to replace, on the album. It is fitting that Sherwood has come to take the place his friend and long-time mentor in the band, and he is doing a fine job.

Looking back, there are so many other ‘classic Squire moments’ throughout his lengthy Yes history. The extraordinary lead bass sections on “Ritual” (‘Tales from Topographic Oceans’, 1973) still stand out, both in the studio and in innumerable live performances, including the famous 1975 QPR open air gig, the 2000 Masterworks tour, and the 2001 ‘Symphonic Live’ concert recorded in the Netherlands with the European Festival Orchestra. There is also the gradual evolution of his Yes concert solos, from the early “Bass Odyssey” –  still to be traced on tape – through to various versions of “The Fish (Schindleria Praematurus)”, “Whitefish” (1983 onwards) and the occasional “Amazing Grace”. Ever the showman, Squire used these to shake the rafters and foundations of the many venues he graced over the years, including the Royal Albert Hall in London and Madison Square Garden in New York.

Last but not least, “Onward” (‘Tormato’, 1978) was the song used as a memorial at the beginning of Yes concerts for the past couple of years after Chris Squire’s death, together with his iconic Rickenbacker being picked out in spotlight at the centre of the stage, pre-concert. That tune, lovely though it is, is a touch too sentimental for my personal tastes, especially in the string accompaniment. But a song which is terribly underrated, which says so much about Squire in its composition, performance and presentation, and which richly deserves concert performance at some point, is the mini-gem “Can You Imagine” (‘Magnification’, 2001). This started out life as part of the XYZ sessions with Jimmy Page and Alan White some years earlier. Its lyric is also a fitting memorial to the man, whose questioning but positive humanistic outlook always provided something of a balance in relation to Jon Anderson’s free-floating spirituality.

Can you imagine what it’s like seeing life
From the other side?
Do you imagine darkened light, starless night?
You might need a guide.

And will the illusion confuse you, play with your thoughts
And alter your mind?
Or become a delusion, exclude you
Change your existence
For another kind?

Photo credits: Kevin Roy Roth; album covers (Atlantic Records). Lyrics: Eagle (UK), Beyond Music (US). Most of the music cited above can readily be found on line in various formats. Thanks to Tim Webb for correcting me about ‘E.H. in the U.K.’ Those wishing to explore the music of Chris Squire in more detail are recommended to go to Miguel Falcão’s YouTube channel for some superb bass covers and transcriptions. A further selection of tracks can be found on Spotify here. News about Squire’s music and legacycan be found on Henry’s Potts’ helpful and informative ‘Yes – where are they now’ pages. There is a plaque remembering Chris Squire in central London.

If you enjoyed this article, please check out my book Solid Mental Grace: Listening to the Music of Yes (Cultured Llama Publishing, 2018).